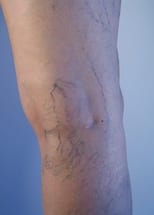 Endovenous radiofrequency ablation is a minimally invasive alternative to vein stripping for the treatment of varicose veins. Varicose veins are veins in which the valves are damaged to the point that there is a backflow of blood, called venous reflux. Venous reflux interferes with efficient circulation and causes blood to pool in the affected veins and cause distention.

Benefits of a Endovenous Radiofrequency Ablation

Radiofrequency treatment offers benefits over vein stripping and other treatment methods. These benefits may include the following:

During the radiofrequency ablation, a small incision is made through which a catheter is inserted into the targeted vein. Once the catheter is precisely placed, radiofrequency energy is directed into the wall of the vein, causing the vein to collapse and seal so that blood can no longer travel through it. Once the damaged vein has been sealed, blood is naturally rerouted through other, healthier veins in the body.

The Risks of a Endovenous Radiofrequency Ablation

While radiofrequency ablation is considered a safe procedure, there are certain risks associated with any type of surgical treatment. Some of the risks of this procedure may include:

The Recovery from a Endovenous Radiofrequency Ablation

After the radiofrequency procedure, patients may experience mild bruising and swelling in the treated area, but are usually able to return to your regular activities shortly after treatment. In most cases, patients will be required to wear compression garments for several weeks to promote healing and relieve any symptoms of swelling and bruising.